How thrilling is this news? Today, Deborah Harkness announced the first AllSoulsCon to take place on September 12, 2015. What is the AllSoulsCon? According to the event’s website:

“Created by fans, for fans, AllSoulsCon is a unique opportunity to meet the author, the outstanding narrator of the audiobooks, Jennifer Ikeda, as well as other trilogy enthusiasts.

“AllSoulsCon 2015 will take place on Saturday, September 12, in Los Angeles, California, and will be live streamed to virtual attendees around the world. That’s right! You’ll be able to participate no matter where you are.

“All proceeds from the sale of tickets will be donated to Bodley’s American Friends.”

We hope to see you there! #AllSoulsAllTheTime 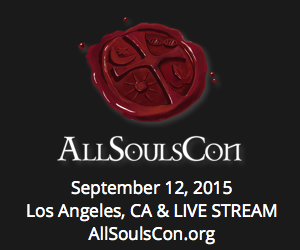